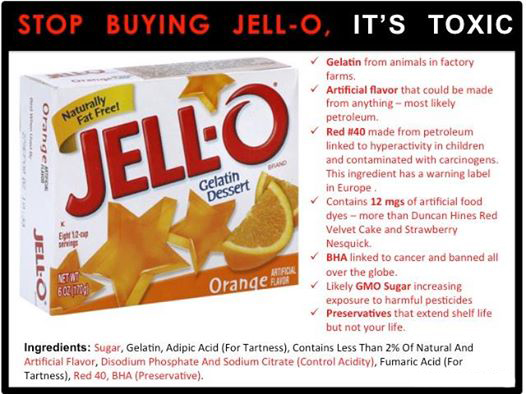 It’s colorful, wiggly and fun. It is one of the most versitile creative foods on the market. You can make jell-o molds, jell-o shots, jell-o gigglers, parfaits, mix flavors, colors, it is essentially a fruit party in a box. Jell-o has been a favorite of kids and adults alike since the brand was founded in 1897.

Gelatin itself dates back to as early as the 1400’s. It is a protein produced from collagen that comes out of animal bones and connective tissues when they are boiled. It became popular during the Victorian era especially among the upper crust of society. In its original form it was time consuming to produce until 1845 when a patent for powdered gelatin was issued. This made it more readily accessible to the general public. It wasn’t long after that that flavors were added and a dessert treat known as Jell-O was founded.

-Sugar – Sugar has been linked to obesity, and suspected of, or fully implicated as a cause in the occurrence of diabetes, cardiovascular disease, dementia, macular degeneration, and tooth decay. It has highly addictive properties. Much of the sugar produced is genetically modified.

-Gelatin is a complex mixture of proteins derived from partial hydrolysis of collagen extracted from animal hides and bones. It has little nutritional value. Though we must add that gelatin aides digestion and has been successfully used in the treatment of many intestinal disorders. The reason of the beneficial effect on digestions is because gelation is a hydrophilic colloidal substance. This means that it attracts and holds liquids. It facilitates digestion by attracting digestive juices to food in the gut and by distributing digestive action evenly through all the food. Consuming good amounts of gelatin with every meal greatly reduces the digestive stress resulting from the consumption of processed and cooked food or from sub-optimal digestive function. Gelatin also improves digestibility of beans and legumes, grains, dairy and meat protein. HEALTHY SUGGESTION: buy PLAIN GELATIN and Mix it with your favorite Juice. Allow it to set, and POOF you have homemade jello without all the chemicals.

Contains less than 2% of:

-Natural and Artificial Flavor – As “Natural” remains undefined by the FDA this can contain pretty much anything.

-Red 40, Blue 1 (and other assorted colors) – new studies now show synthetic preservatives and artificial coloring agents aggravate ADD & ADHD symptoms. Several major studies show academic performance increased and disciplinary problems decreased in large non-ADD student populations when artificial ingredients, including artificial colors, were eliminated from school food programs. Many of these colors include levels approved by the FDA of arsenic and mercury and have been banned in the European Union.

-BHA (preservative) Though the FDA recognizes it as GRAS (generally recognized as safe), The National institute of Health says it’s “reasonably anticipated to be a human carcinogen.” It has been linked to cancer and has been banned in many countries.

And alternately – in sugar free jell-o the sweetener replacing sugar is:

– Acesulfame Potassium is a potassium salt containing methylene chloride, a known carcinogen.
Reported side effects: Long-term exposure to methylene chloride can cause nausea, headaches, mood problems, impairment of the liver and kidneys, problems with eyesight and possibly cancer. Acesulfame-K may contribute to hypoglemica.

Why on earth this is fed to people in hospitals on a regular basis is beyond me. Not only does it have no nutritional content and barely any energy from calories, but it also contains numerous chemicals which – though FDA approved – are shown to harm the body.

The conclusion? Jell-o may be fun, but it most certainly is not healthy.