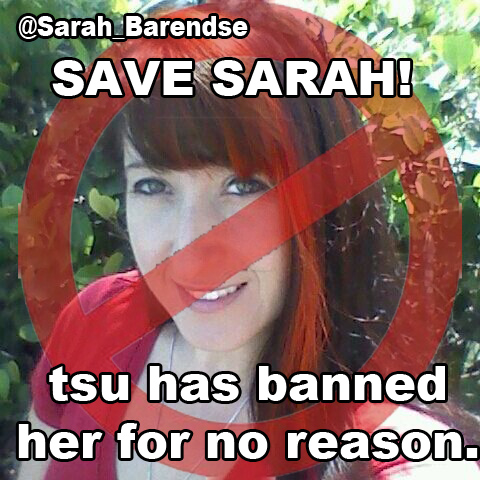 UPDATE: I made enough waves to get to Sebastian, the creator or tsu.co. I received an apology. Please read my newest blog for the update.

Tsu may appear to be a fun friendly site, a good Facebook alternative – especially when they promise profit sharing to all of its members giving them 90% and keeping only 10% for operational fees but my experience has been a complete waste of time and energy.

Only on tsu for 4 days, I was banned out of no where for no reason. I received an email after the ban that said I had either spammed or done other inappropriate activity. Neither is true.

In the time I was thereI had gathered over 500 friends, 600+  followers, and 70 children (members I had join with my short link).

I had posted mostly original meme’s that were not just original content in the idea that I posted it, I actually created them myself.

Now with all of that said? It is their site………………… If they want me banned? I can’t stop them. It is their loss though. I am a wiz at social media, very interactive and incredibly creative.

The problem I now have with them is that despite banning me, they are STILL using MY Profile to recruit! That is no different than a dating site putting up fake pics and profiles of people you can never possibly meet………………. For this reason I call scam on tsu.co.

They apparently like to see who can recruit some good numbers fast and then will take over the momentum and keep whatever profits there may be……….

Your Loss tsu.co and may I say stupid stupid move.

To TSU: I want either an apology and reinstatement OR I ask firmly that you REMOVE my profile!

Here are a few examples of what I had been posting: