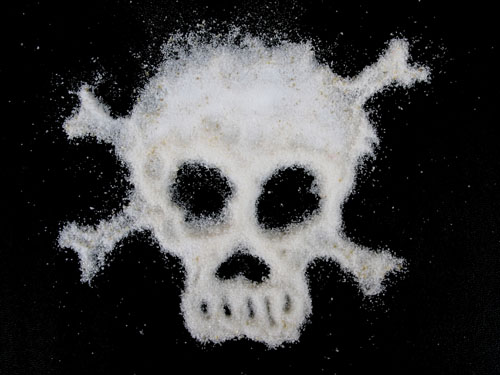 We have been duped. Somehow, we have all gotten it in our minds that calories are the enemy. Calories are not the enemy. They are simply a unit of energy contained in food which we, as humans, need to power our bodies.

Because of this, the food and drug industry has created their very own niche market and category. Artificial chemical sweeteners. While sugar rings in at only 16 calories per teaspoon, all its artificial counterparts come in at zero or nearly zero.

The question becomes: Is that small of a number of extra calories added to your diet worth the exchange?

FDA has recognized artificial sweeteners saccharin, aspartame, sucralose as GRAS (Generally Recognized as Safe). But are they?

While it is difficult to lump these substances into one group because they are scientifically each their own compound, all artificial sweeteners are created in a lab and are man made. They trick your brain and induce the same metabolic response as sugar. They can be up to 600 times sweeter than sugar itself which makes them addicting.

Despite studies over the years naming them as cell growth inhibitors and possible carcinogenics they have been marked as safe for consumption by the National Cancer Institute. Artificial sweeteners have had numerous complaints lodged against them and been investigated as a possible cause of brain tumors, mental retardation, birth defects, epilepsy, Parkinson’s Disease, Fibromyalgia, and Diabetes. So far, the FDA has made no move towards regulation despite having the studies to back up the toxicity levels. http://www.fda.gov/ohrms/dockets/dailys/03/jan03/012203/02p-0317_emc-000199.txt

Outside of the safety question. Do they benefit a low-calorie diet?

Although zero calorie studies have shown that increased appetite is often a side effect of consuming these sweeteners. This can up the overall food intake and negate the calories saved through the low or no calories foods or drinks.

Consuming excess sugar can lead to health issues such as obesity, diabetes, heart disease, and metabolic issues, however, it is made in nature and derived from the sugar cane plant. According to a 1973 study done by Loma Linda University, when you consume 100 grams of sugar, equivalent to a one-liter bottle of soda, your white blood cells are 40% less effective at killing germs. This can cripple your immune system for up to 5 hours after eating sugar!

The best answer is to eliminate sugar both artificial and natural it all together. If you must sweeten, all natural Stevia is a natural herb which does not negatively affect health in small quantities. Make sure to read the ingredients. While it would seem that Stevia would be the only single ingredient that is not always the case. Look for pure Stevia as a standalone ingredient.

Nutrition Specialists of Florida would love to help you create a lifestyle change and boost your health. We can be reached at 239-947-1177 or by going to our contact page and sending an email.