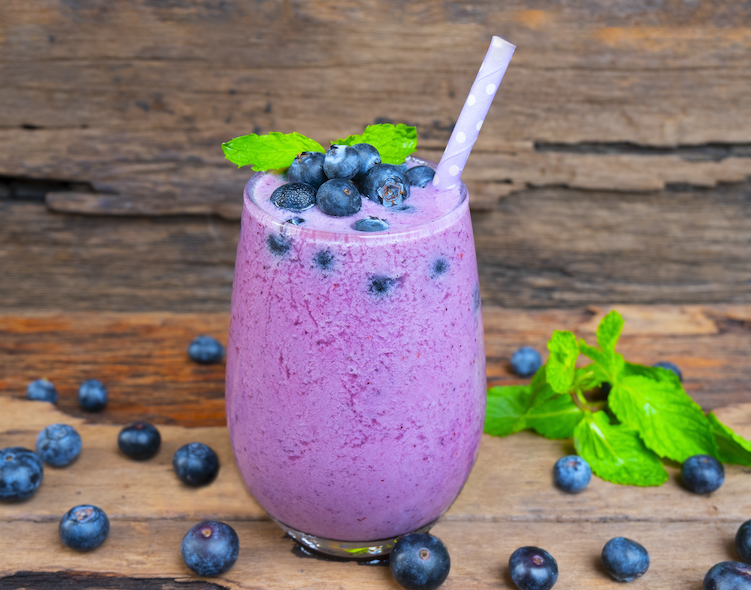 Believe it or not, these “Diet” Milkshakes That Are Actually Great for Your Health and Tastebuds!

That’s right. Fitness over ’40s very own men’s physique competitors and multi contest winner Ken Elrod has concocted a healthy milkless milkshake. We realize that is a very confusing statement. After all, if there is no milk in it… (blank stare inserted here.)

While sticking to his protocol for men’s physique bodybuilding Ken tends to get creative in his food prep. Sometimes with some really good results. This one I wanted to share with you all.

This shake is thick, creamy, and delicious. He had me try it this morning and I almost didn’t give it back.

Place in a blender, Ninja, or Nutribullet for about 20 seconds and voila! Instant milkshake or at least you would think it was by the taste. Drink soon to keep it cold and from separating.

The advantage of Ken’s version too is that there are many nutrients besides the normal macros that your body uses and benefits from.

Blueberries – Blueberries, though not classified as a “miracle food” sure are. They are naturally super high in antioxidants, they help to reduce DNA Damage, may help protect against aging, have shown benefit in fighting cancer, can protect from cholesterol and help support healthy blood pressure.

Egg Whites – Are one of the purest protein forms on the market (so long as you don’t happen to have an egg allergy). These are pasteurized so there is no risk of salmonella poisoning as there is with cracking open raw eggs. Frankly, it also tastes better and isn’t that weird slimy consistency. If you have never drunk egg whites before these taste almost like drinking skim milk.

Egg whites, of course, are a protein source but they also hold omegas, potassium, and riboflavin.

Egg whites International’s liquid egg whites which we have found in bulk are far cheaper than buying egg whites from the store in small cartons or even from Costco. They are pasteurized and can last in the fridge for up to 6 months. (not that we give them a chance around here.) www.eggwhitesint.com is our source, tell them Ken sent you if you happen to decide you would like them in your fridge too.

Dymatize Iso 100 – Was named supplement of the year for multiple years running by bodybuilding.com. It is gluten-free, fast-digesting, banned substance tested, and tastes great. It is sweetened with natural stevia so there are no artificial sweeteners.