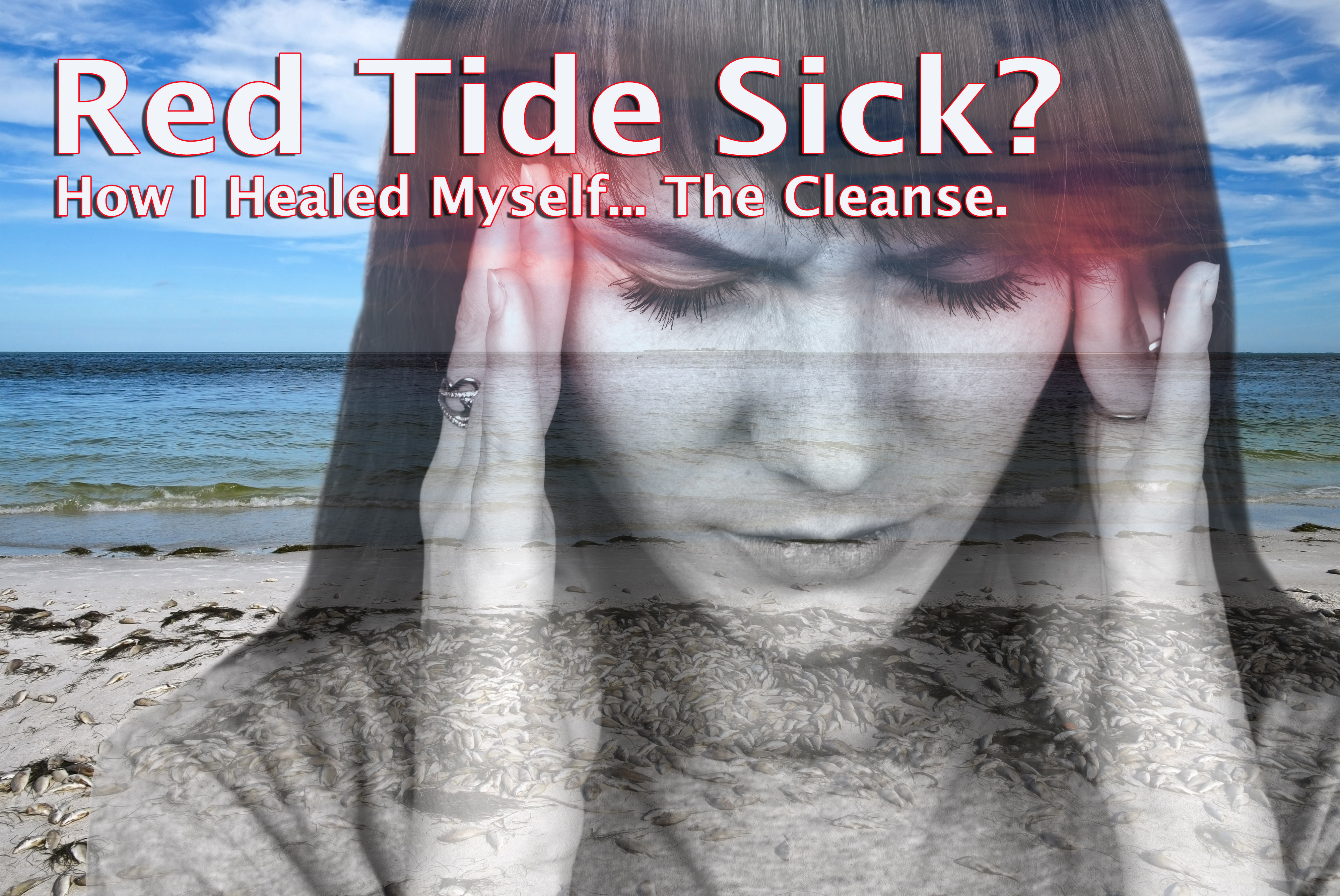 I was a medical mystery. Living here in Southwest Florida back in December of 2017 I had a sudden onset massive headache that no doctor could figure out. Many medical doctors, many blood tests, MRI’s, Echocardiogram, EKG, Acupuncture, Chiropractic, Massage, ENT’s, Endocrinologists and more. I had reached a point where I had literally tried everything I could think of.

It wasn’t that I was getting frequent headaches, it was one solid headache for 11 months interrupted only by pain medication. When it would wear off, I was again left clutching my head in tears.

Things changed when I happened to read an article in Newsweek that said Red Tide had been plaguing Florida for 10 months. That was the exact time my headache began. I started to wonder, could they be linked?

What I found is that currently in our water is not only the yearly red tide (brevetoxin) but also the blue-green algae (cyanotoxin) both are toxic to wildlife and humans. As if that wasn’t enough, the runoff water being released from Lake Okeechobee has pesticide and herbicide chemicals in it including glyphosate (Monsanto’s popularly sold weed killer RoundUp) which can lead to organophosphate toxicity in humans and animals alike. It is a known carcinogenic that is somehow not yet banned.

I researched and called the health department and even the CDC who both told me “There is no test”. That simply isn’t the case. You can be tested for cyanotoxin via a nasal swab. You can be tested by blood or urine for the brevetoxin in Red Tide though I have yet to find a lab that offers the test needed. All three toxins are in a group of similar neurotoxic compounds which are tasteless and odorless. They can be aerosolized into the wind and carried for miles inland. Toxicity can result from breathing the toxic air, touching it via skin, or eating contaminated seafood. Organophosphate poisoning is easily tested using the Cholinesterase RBC and Plasma blood test. This test was my answer.

When I got the test results back, initially I saw that my values were in green. I assumed (wrongly) that meant I was “ok”. In reading the CDC website, it clearly stated that several doctors and researchers agreed despite the lab values, that toxicity can present itself starting at only 40% of the maximum marked value. This landed me at 78% on the RBC and 53% on the plasma.

I had been being poisoned. The culprit was organophosphates. I am a Graphic Designer and Writer who works inside and am not exposed to pesticides or herbicides of any kind in a normal way. I live at 6 miles inland from the water.

Believing I had found the root cause I went about searching for a solution and thankfully, I found one. Working with my long time Chiropractor/Nutritionist who consulted with other physicians to come up with the best solution for a neurotoxin cleanse, one was chosen.

It is a 10 day cleanse that is intended to release the held toxins within the liver as well as other cells in the body.

An honest review: I have done lots of other cleanses in the past 20 years. This one I started at the end of a head cold simply because of timing with my upcoming wedding and wanting to be finally better. It made it even more difficult to tell if it was totally detox symptoms or left over head cold.

Days 1-3 It was not too bad. Slightly sniffly with a hot head, feeling tired.

Days 4-8 it felt as if I had a massive head cold or flu. I could tell it was detox symptoms because it came and went in waves rather than just sticking around. Day 6, though I work at home, I was unable to work at all and spent the day pretty much face down on the bed. Day 7 and 8 were rough too. Lots of hot Epsom salts baths trying to soak and sweat it out.

More info on what to expect when doing a cleanse – what is a Herxheimer Reaction?

I have not had a chance to verify this change through a repeat blood test, but what I do know is that my 11-month debilitating headache is now blissfully gone and I am feeling more like myself again though I do still have other symptoms at least that massive head pain that woke me up at 3 am daily taking more pain medication is no longer. While the damage done from the organophosphate poisoning can never be undone, at least with the cleanse, I feel like I have been able to clear my body’s ability to deal with it better. Rather like changing the oil filter regularly on your car…

*If you do the cleanse and stay in Florida you will need to redo it every year or so because you are still being exposed. I myself am choosing to move out of state to save my health.

TO DO THE CLEANSE: Please contact the office of Dr. Jason Kaster Fort Myers, Florida at 239-332-2555 www.drkasters.com info@drkasters.com and let them know you would like to be considered for the Red Tide/Organophosphate cleanse. You do not have to be in the area to do the cleanse. The testing and the cleanse together I believe is $400. (More info on symptoms)

Disclaimer: Because it is such an intense internal cleanse and many of us are incredibly overloaded with toxins if you are not in the best of health otherwise it is often wise to do it as a doctor supervised cleanse rather than just trying to go it alone. My intent is to heal, not to harm anyone and I myself am not a doctor so I am not simply posting the products to use on here.